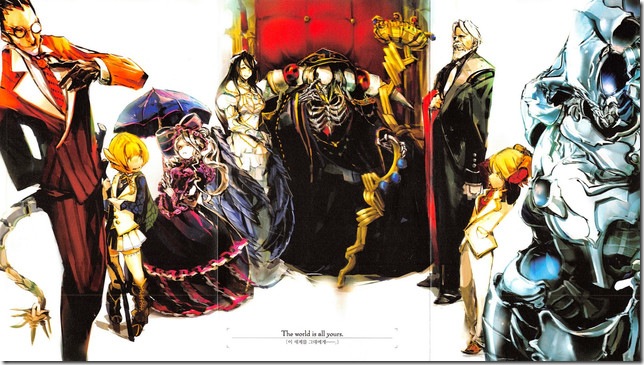 Early this year, there a Japanese light novel which catch my attention. The novel is named Overlord created by Maruyama Kugane. It has antihero genre mixed with medieval fantasy background. Overlord novel was so much successful in Japan lead an announcement that it will get anime version somewhere in 2015 and due it’s successful publication lead into creation of it’s manga version too.

In summary, Overlord story tells about life experience of Lord Momonga or nickname Momonga or Ainz when he is transported into another world after Yggdrasil online game server shut down in it’s last day. He originally just want to spend his last day in his most memorable game online where he and other his best friends usually play in last few years. An unexpected event, bring him and his guild’s guardian into new world beyond his imagination. The world has some similarity to Yggdrasil online world but it becomes reality this time. Momonga who stranded in alien world without companion, except his guild guardians, castle, resources and knowledges, have to cleverly mobilize all available resources at his disposal. Later, he uses this resources and knowledge to conquer the world into better place for anyone in behind scene.

In beginning, Momonga is describes as a lone mid-age office employee who spend his free time to play online game named Yggdrasil. He and his best friends in online game has been made reputable and fearsome guild called Ainz Oaal Gown. Meanwhile, Yggdrasil game itself is describes as a quiet revolutionary 3D MMORPG game where players have freedom to customize their game characters, items, equipments, servant AI and residence as they like. It’s much like Ragnarok Online 2 or Lineage 2 combined with oculus rift feature.

Yggdrasil was popular online game for ten years and Momonga had been played it for two years before it’s last day server closure. He want to make a memorable time as guild leader where he will stay until the server shut down and he forced log out from it. He inspects everything in the guild for the last time and proceed to his throne room for waiting until midnight where he think he will be log out. 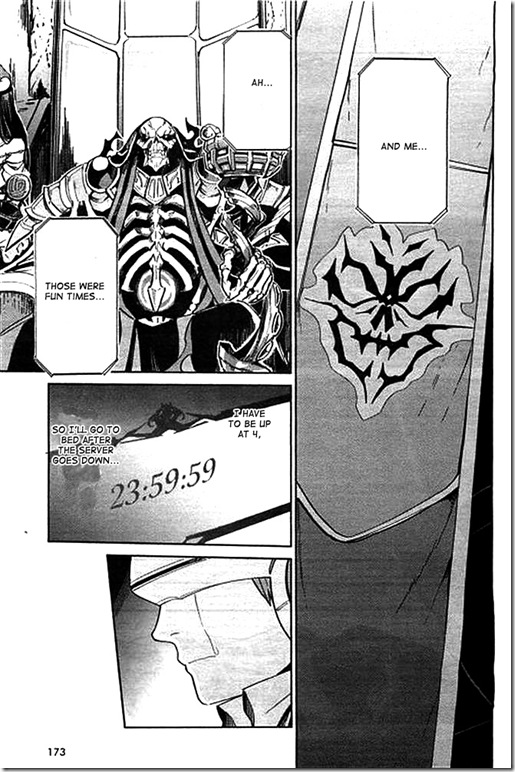 He recalled all his memorable experiences when he played the game with his online friends where they share happy, sad and joy time together to build their guild from scratch and eventually become one of reputable guild in Yggdrasil game. He wait until the last second of the game. 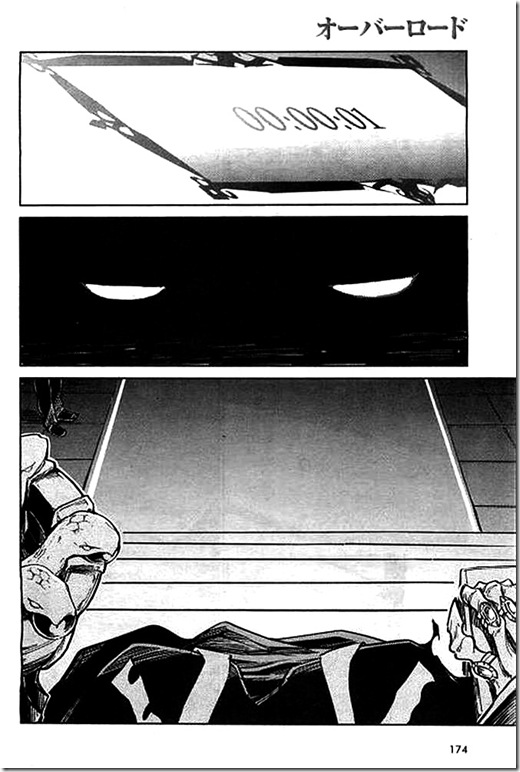 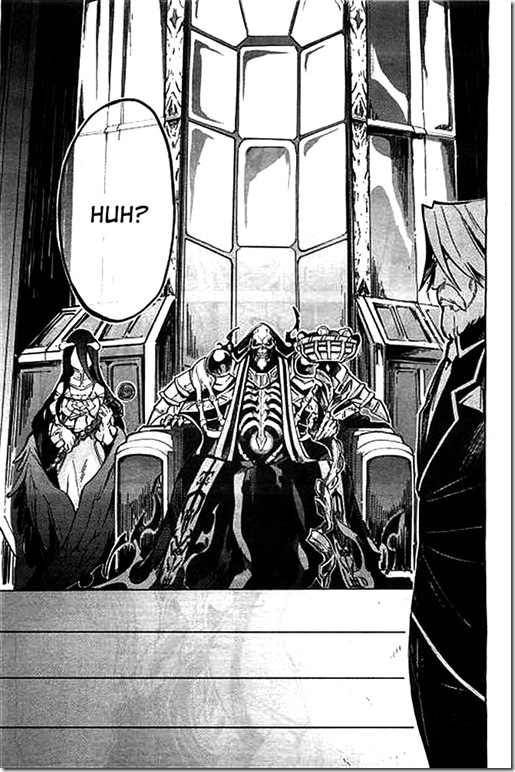 Strangely, Momonga find himself still inside the game even after midnight time. In beginning he think Yggdrasil developer decides to extent server time for some time or some bug (game anomaly) interfere the game. 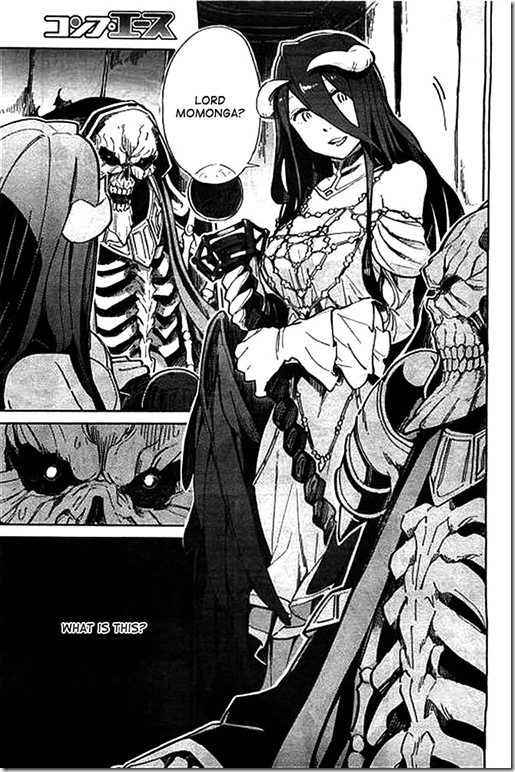 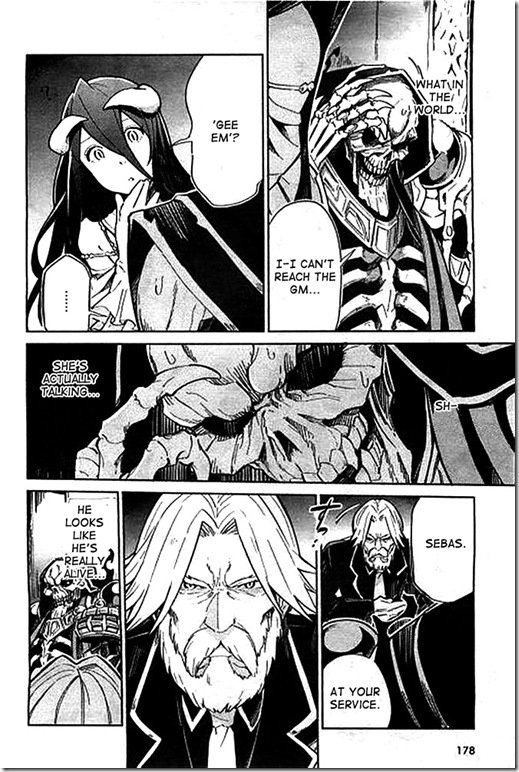 In middle of his confusion, he get surprise when he sees his nearest female guardian avatar, called Albedo, become alive and moving and speak to him like normal person. He also find his butler, Sebas, ready to waiting his command. Momonga orders Sebas to investigate situation outside the castle with several armed maids, while he order Albedo to call and gather all guardian in Ainz Oaal Gown’s castle to consolidate his situation and try to figure out what happen in the game.

When Momonga arrived at Colosseum, an arena where he can oversees all his guild guardians, he meets twin guardian named Aura and Mare. He asked them to help him to get some practice so he can test if his magic or magic still exist in this world. Momonga able to perform magic spell and his guardian also to cast it too like normal in game. In addition, all game features can be done normally, except Momonga cannot make online communication to his world. 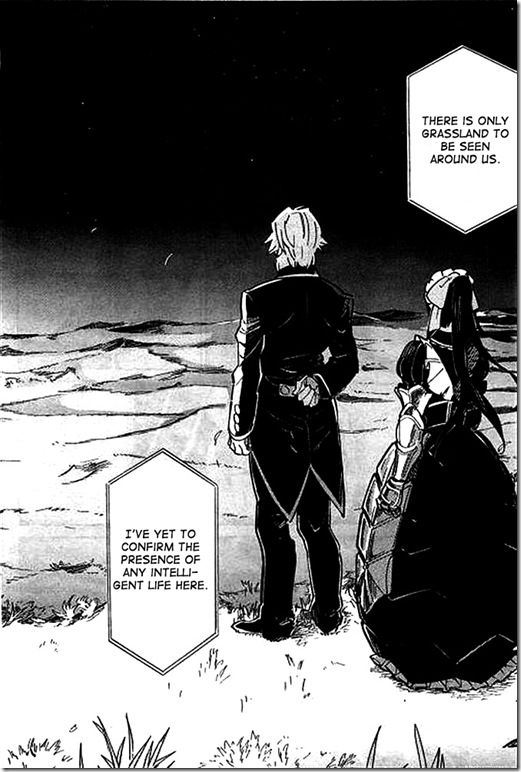 Much to his surprise, he get report from his butler, Sebas, who states the Ainz Oaal Gown castle which should build on swamp is transported into a grassland without any sign of human or civilization yet.

Meanwhile, Momonga sees one by one his guild guardians report to him and waiting his command. Rather pity himself or find a way to return to his world, Momonga decides to consolidate his power, figure out what kind of world he transported into and lastly he think although he cannot communicate to his world yet he not alone because he accompanied by guardians who represent his best friends and their wishes to continue Yggdrasil’s legacy in live version.

Later, Momonga and his loyal guardian encounter friends and foe when explore and investigate the world where they transported into it. He help and save people from harm while remain incognito result a widespread legend about powerful mage and mysterious squad. In addition, Momonga slowly created a nation with his guild castle as base or capital and begin conquer neighbor territories and invite immigrants to resident in his new country while oversee it from shadow in later stage of the story. Momonga and his guardians with powerful armed disposal and Yggdrasil’s knowledge use advantages of it to counter other kingdom or empire influence in vicinity of his guild, manipulate world affair and slowly reshape the world into better place according to his ideal.

In summary, Overlord is good antihero fantasy manga where reader can see main character uses his manipulation and dark knowledge to gain his objective while remain incognito and strike his opponent at vulnerable time. The story is much like combination of Maoyuu Maou Yuusha and Re:Monster style, except it is more broader and darker although it’s objective is same to create a nation and better world. Overlord has good storyline able fill gap which Re:Monster and Maoyuu Maou Yuusha failed to grasp in their storyline. Coincidentally, when I am researching information about Overlord manga accidently I found the light novel English translation.

Below is the link if any reader interest to read it:

This manga is my first recommendation in 2015.