AFA ID was an annual anime and manga festival that started held in Indonesia, particularly at Jakarta, since 2012. Its acted as a convention, gathering, meeting and social event to gather, influence and awareness public about anime and manga industry in Indonesia. Most importantly, it was became a medium for otaku, anime fans and amateur mangaka who want to introduce their works, hobby and passion related to Japanese hobbies.

The AFA ID 2013 was held between 6,7 and 8 September 2013. It was the 2nd anime festival tried to imitated the festival success last year.  The festival organizer have prepare better anticipation by hold it at better convention place, Jakarta Convention Centre (JCC), better transportation access, invite more companies, exhibitors or sponsors relate to manga and anime industries, and introduce more events and singers too this year.

The festival atmosphere was already heat up even before it’s open hour. More and more visitors, cosplayer and otaku came into festival place since 07 AM although it announced the gate would be open at 10 AM, in reality it was delayed for a hour. They were gathered at entrances gate patiently wait their turn to enter the festival premises. Nevertheless, the gate open delay never affect all visitors who patiently wait outside.

The organizer divide the festival area into two zones. The ground or first floor zones are dedicate for corporate, official exhibitors and sponsors. It also include screening area at a plenary hall which can accesses through ground or first floor entry doors. The visitors who want to watch anime screening must pass verification ticket or wrist ban id before let inside by organizer’s securities. The festival organizer were screening three movies each day of festival. Their anime screening detail was already reviewed in my previous post. 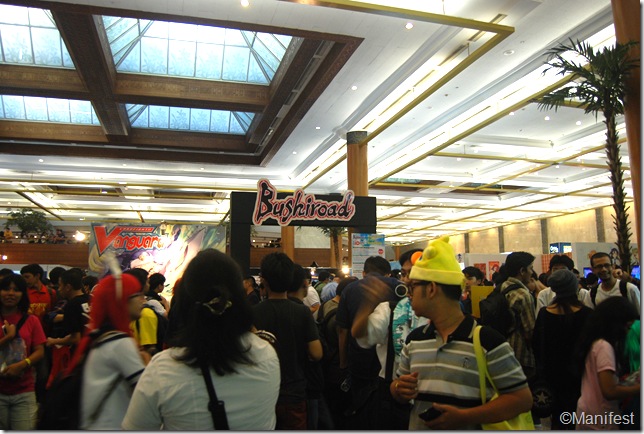 When a person entered the festival ground he would felt overwhelmed and confusion due all booths introduced rare goods that not easy to obtain through normal shops. Rather walking around, visitor should directly go to their most interest booths so he/she has enough chance to browse or buy their favorite items. 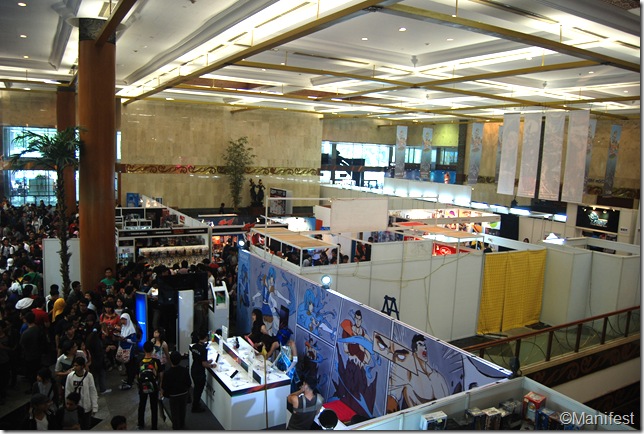 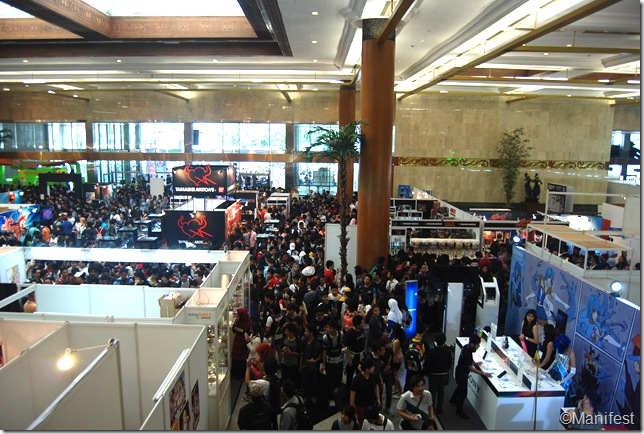 As you can see, the corporate, exhibitors and sponsors booths are separated by blocks with eyes catching ornament for attract consumers who willing to buy their products. Each booths represent their genre, products and theme of anime and manga industries which their company’s orientate. For example, souvenirs, video game, books, cards, posters, figures, cosplay items, etc.

Akiba Town as represented by the title it was the most crowded zone in the AFA ID 2013. Hundred people flock together in that area for browse or buy their hobbies items or just item that catch their attention. There some famous brand that participate in this zone, such as, Good Smile Company, SEGA, ODEX, BANDAI, GUNPLA, etc. 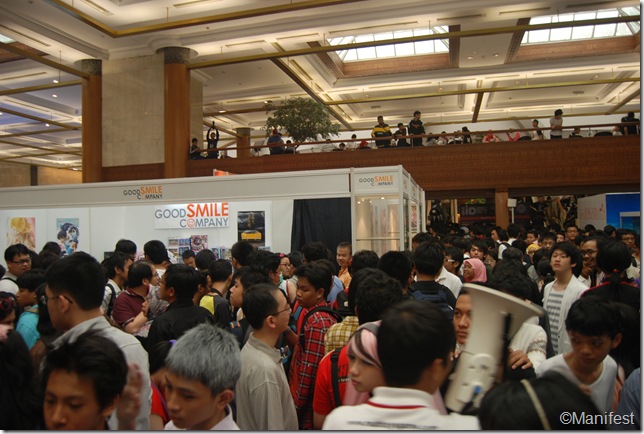 Good Smile Company is a japanese company specialize in promoting Japanese culture and sub-culture outside Japan. The company was headed by Danny Choo, a Chinese British born who immigrate to Japan and work in anime industry. Danny Choo was later appointed as Japanese culture ambassador by Japanese government to help promote Japan’s culture to the world.

As you can see, Good Smile Company booth is specialize sell merchandise relate to Mirai Suenaga, the company’s mascot anime figure, such as, shirt, poster cards, bags, etc. Unfortunately, they often run out stock due huge demands of hobbyist and visitors who buy the company products beyond availability. As result, the booth ruled each buyer is limit to buy single product or one set merchandise (not allowed buy same product at same time) in order to save stock for next day. One set merchandise was sold for Rp 200.000 IDR ($20 USD). 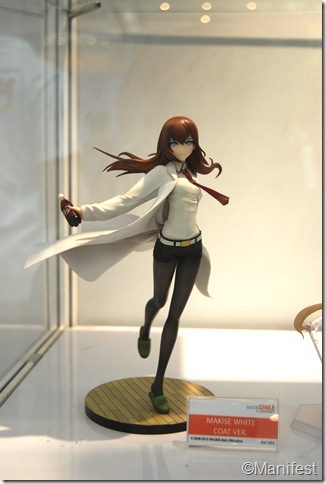 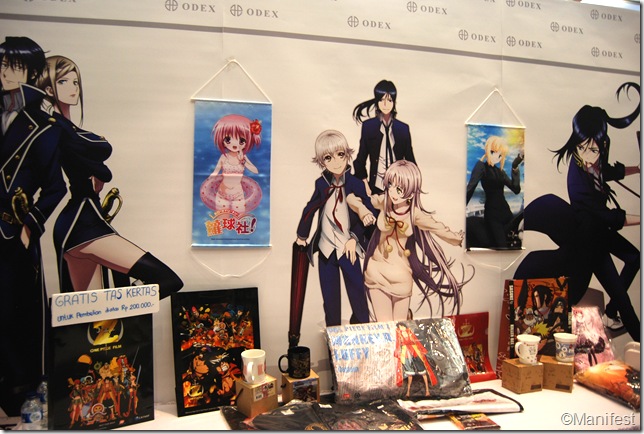 Next, the booth that attract a lot of visitors and mine is ODEX booth, an international company specialize licensing and releasing anime for Southeast Asia region. The company headquarter was located in Singapore. They use AFA ID 2013 as an opportunity to introduce their company present to Indonesia market and import a lot of merchandise items relate to anime and manga industry.

Their display outside the booth was simple but effective represent what visitor expect to see and sell inside the Odex’s booth. There anime poster, bag, mug, shirt, wall decoration, small pillow, etc. 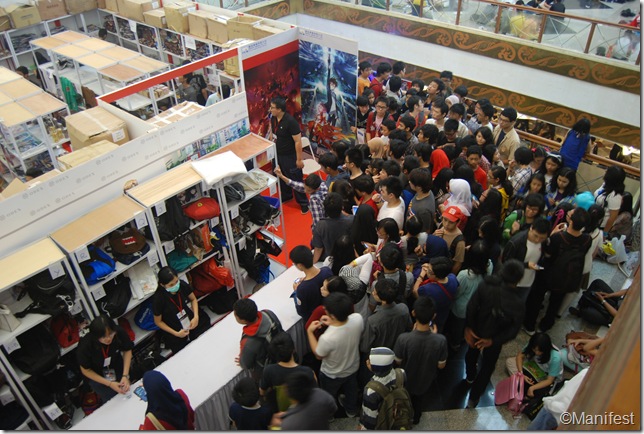 As you can see, the Odex booth was overcrowded by visitors who want to buy anime merchandises. The Odex booth organizer not allowed visitors to brought their bag inside and provide bag deposit counter due security reason. The bag deposit counter is also act as filter to limit people inside the booth only for ten people each time. As result, there crowd clogging in front of Odex booth’s entrance. Nevertheless, valuable items already gone for visitors who visit the Odex booth at noon or night due out stock.

Interestingly, Odex’s organizer would replace or took down anime posters outside their booth each end of day festival and gave it to visitors who wait and already purchase Odex’s merchandise for minimum Rp 200.000 IDR ($20 USD). The anime posters were printed in thick and solid photo paper so they have high quality detail and durability. Its a good promotion to keep visitors to wait the booth until end of day festival. However, only anyone who have strong mind, preparation and commitment who willing to wait outside Odex’s booth until the poster put down. In addition, the posters are huge and should put it insides drawing tube bag to prevent dirty or tear problem. 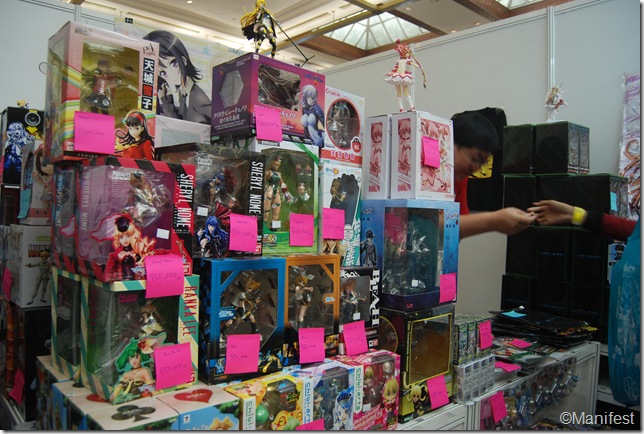 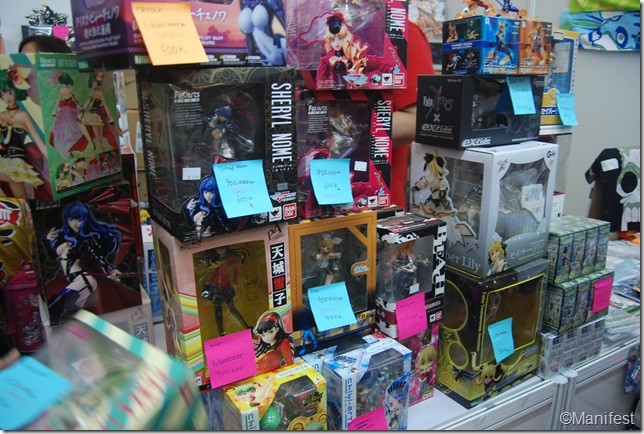 The most surprising about this anime figures is their prices tag. Each anime or action figure is sells around Rp 500.000 IDR ($50 USD) up to Rp 2.000.000 IDR ( $200 USD). The price is reflect how much devoted hobbyist who spend their time into this hobby. 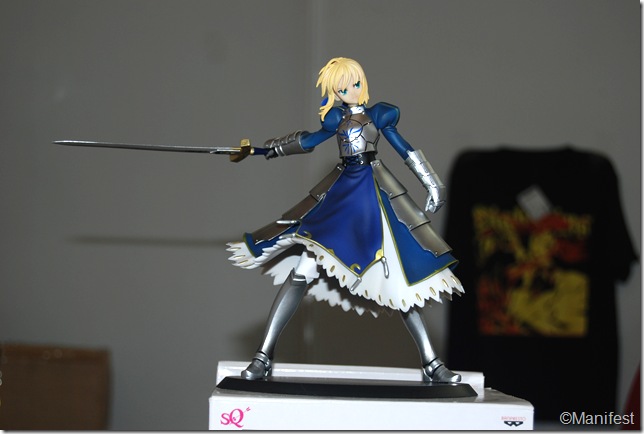 Nevertheless, the AniBee’s company sold high quality and detail figure better than any company who already sell anime figures in Indonesia market due their product are import from Japan or Korea licensed manufacturer. In Summary, their products are top Notch one.

The cards battle requires two participants who are try competing and figuring out his opponent card through bet his card or reinforce element of his card higher than his opponent. The card battle took in small deck where main, secondary and support cards laid and bet according to specific rules. It’s pure and fun competition where at the end of game both lose and winner resolve back to their origin card position. So, anyone who have better cards collection have better chance to win in card battle game. 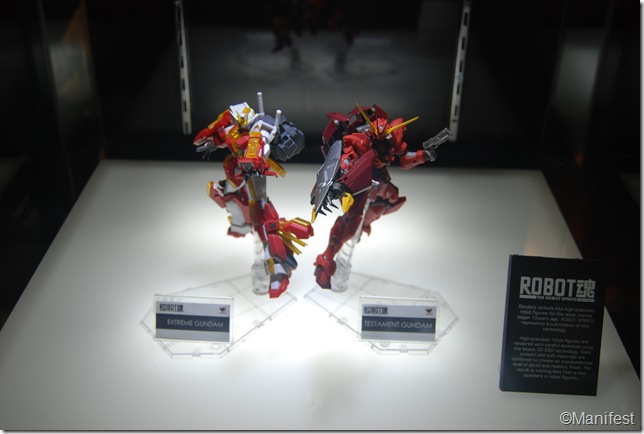 This year festival, two sponsors of Gundam universe open their booth across each other. Bandai and Gunpla companies were introduced their rare collection display to public visitor. Both company also sells Gundam’s action figures beside display their respective collection for visitors. I didn’t have a chance to check the Gundam’s merchandise prices due overcrowd booth at the time. 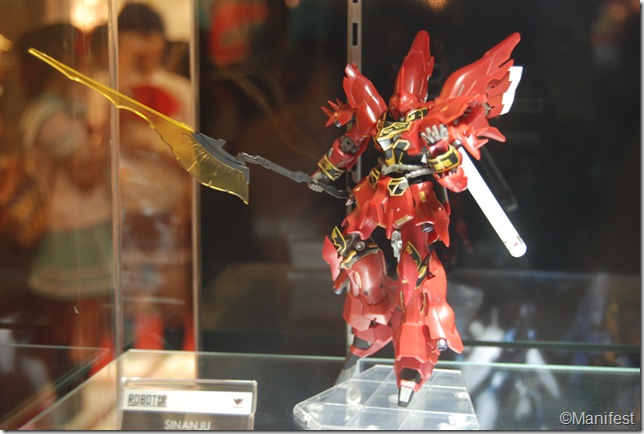 Nevertheless, the Gundam’s action figures which display for public have such high details and same reference for the Gundam movie that screen during the festival. The Bandai booth display 25 Gundam figures for visitors who curious to Gundam products. Meanwhile Gunpla orientates more to sell Gundam’s merchandise rather display their best products. More importantly, those companies present add with Gundam’s movie screening result more hype enthusiasm of Gundam’s fans who visit the festival.

LittleBubu was another company who participate at AFA ID 2013 besides well known anime industry companies. It sells various anime merchandises, but it’s main product is anime figures. Again, I unable to check prices of their products due overcrowding situation.

Tamashi Nations is another company who orientate manufacture and distribution of anime and action figures. However, they sell different product genre than previous companies. Its introduces and displays One Piece anime figures for public. The company although only display rare and high quality One Piece’s crew member, ally and enemy figures attract considerable visitors due high popularity of One Piece manga and anime in Indonesia. 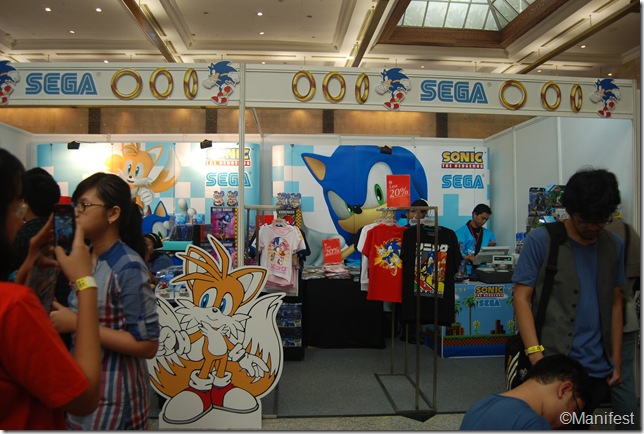 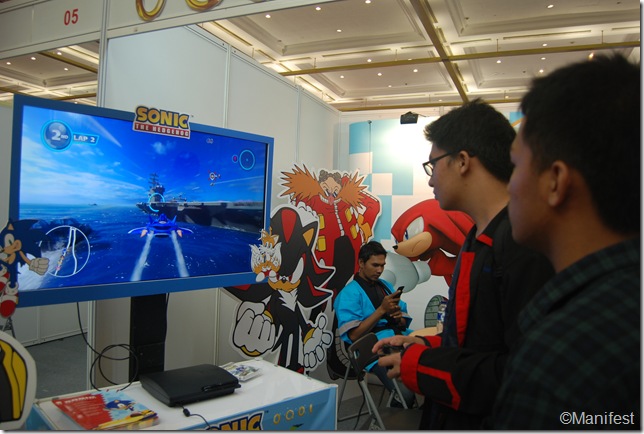 Interestingly, the SEGA booth introduces SEGA newest game console and Sonic Hedgehog latest game. Visitors have opportunity to test the game first hand and it looks like has received positive response for gamers who ever played it.

In the end, I  decided to split my review about AFA ID 2013 into two posts due too long review made boring for anyone who read it. On the other hand, the quality of review will demise if I shorten it.